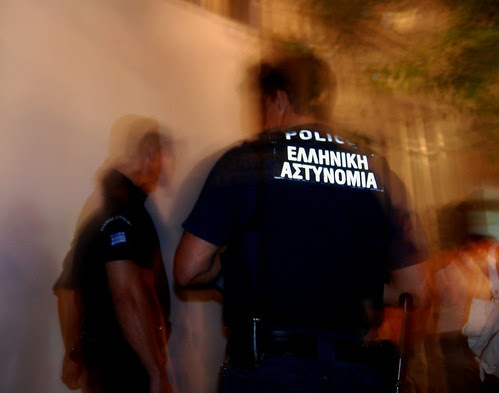 I just came across a story that once gain confirms my belief that the police here in Greece are out of control subject to little or no oversight. In an appalling case reported in the Eleutherotypia newspaper's site (see here in Greek) a 35 year old Armenian woman was beaten, handcuffed and detained in front of her two year old child home on the home from a supermarket in Athens last Thursday.

According to the interview she gave to the newspaper the incident was triggered when the woman, who is married to a well - known Greek musician, was accused by plain clothes police in an unmarked car of insulting them. They then asked if she was from Romania and when she said that she was, in fact from Armenia demanded to know why she was in Greece. They then produced police ID and demanded she come with them to the local police station.

When she went to get the pushchair carrying her child they grabbed her, pushed her to the ground, kicking and punching her in the belief she was resisting arrest. The hapless mother was handcuffed and taken with her child to the Aghios Pantelimenos police department where she was kept for four hours.

The Aghios Pantelimenos district of Athens has been in the news on several occasions over the last year following clashes with the far right group, Chrysi Aygi and immigrants living in the area. Many foreign born shop owners have also accused the police of turning a blind eye to racist intimidation in the area.
Posted by teacher dude at 12:03 pm