The story so far - Feeding refugees in Thessaloniki, Greece 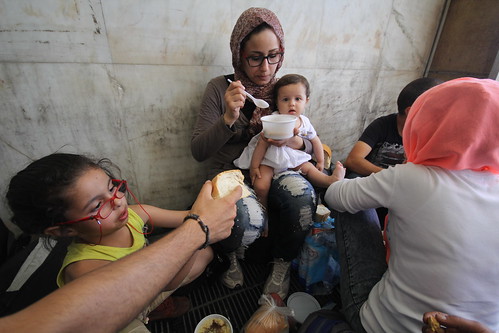 Today, I'm taking a day off, this will the second day off I've had in the last five weeks. What was once a small, part-time effort to feed refugees here in Thessaloniki has mushroomed into a seven days a week effort (see our Facebook page) that hands out cooked meals and other much needed items to anywhere between 30 and 100 refugees a day passing through the city on their way north. Even now I'm amazed by how quickly and how successfully this has taken off.

Five weeks ago it became clear that the number of refugees in need of help was far beyond the means of me and my friends and so I sent out a call for help via Twitter. the idea was that like-minded people would get together and see if we could organise ourselves and expand the help we could provide. That has succeeded beyond my wildest dreams and instead of just a couple of people handing of cooked beans in a park I'm proud to be part of a group that is able to help and information to hundreds every week.

After the first meet up, a number of volunteers are came forwards and quickly we formed ourselves into a much more effective group. I'm not sure if it was luck or good timing but along with the first wave of people to join us were those who possessed an immense range of vital skills as well as a genuine appetite for hard work. Amir, has proven to be a huge asset as he himself is from Afghanistan and not only helps with translation and cultural advice, but also other insights into what it means to be a refugee. That combined with the fact that he is an able manager meant that he kept us going off the rails, especially, in the beginning when we had the tendency to run around like headless chickens.

The same goes for Maria, a German exchange student who as well as bringing much needed structure to our group, has also been its calm centre when things threatened to grow too chaotic. That combined with her gift for languages, social media skills and ability to forge links with other, similar groups has been invaluable.

Giannis is a 70 year old Greek pensioner who catches two buses just to get to the centre of the city to help us. His passion and knowledge of the local political landscape proved vital in establishing links with and getting help from Thessaloniki city council. Thanks to his and other people's intervention the city has provided toilet facilities to refugees and 50 portions of cooked food a day along with a van and driver to assist us.

Another source of assistance has been our collaboration with the Oikopolis social centre who on hearing of our work opened their kitchen facilities to us. This along with the network of connections that have at their disposal has transformed our efforts. In addition to material help they have been able to put us in contact with other groups doing similar work in the city.

After the initial wave of people joining us with have also been lucky enough to attract other volunteers who make all this possible and often are lugging things in 35C summer heat. Literally, without them none of this would be possible. They are an international bunch and on any given day there may be anywhere between four and eight different nationalities taking part.

The ever tireless Gorka, a Spanish exchange student, Marina , from the Ukraine, also on an Erasmus program, Nikoleta, a first year psychology student who is a also a dab hand at DIY and organising people, Safar, our second Farsi speaker who is always willing to do whatever is needed, also willing to make sure the job gets done., Jason and Marcus, our Irish friends who have really been great in providing help, the wonderful people from Anatolia College who have regularly brought much needed sanitary items and clothing,... This list goes on and I know I have left out people who should be mentioned, but don't worry, over the next few days I'll be filling in the missing names.

To say the last few weeks have been transformative is an understatement, the fact that we not only got this feeding program up and running but in the midst of a crisis here in Greece is a testament to the strength of people's willingness to help.
Posted by teacher dude at 7:47 pm 93 comments:

But Yes or No to what? Greece decides on Sunday. 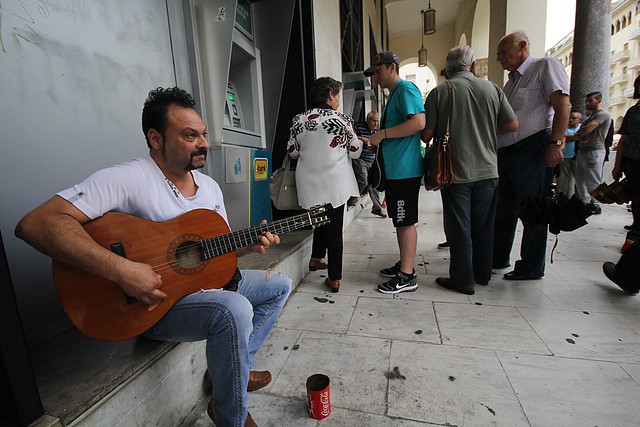 On Sundays Greeks go to the polls to vote. They will be asked to vote Yes or No. But Yes or No to what? The question seems to produce an endless array of answers, which have left Greeks arguing passionately for the past week, both on social media and in real life.For the economically minded supporters of the Yes side, it is a vote to stay in the Eurozone, to retain a stable currency and avoid the risks of introducing a new, untried currency which may or may not be worthless. It's a Yes to open banks, pensions being paid on time and a step away from the financial abyss. For conservatives it's a Yes to membership of the European Union and a step away from what they see as rabid, socialist madness.

In the No camp, a No is a refusal to accept an creditor imposed austerity plan which has crushed the Greek economy and even on its own terms is a failure. For the more nationalistically minded its is a vote for independence, a chance to show foreigners that Greeks will not and cannot take any more crap from either Washington, Brussels or Berlin.

In the maelstrom of debate, the usual lines that divide the Greek Left and Right have been blurred, muddled and sometimes utterly forgotten. Nor, as it is sometimes portrayed as a fight between haves and have nots. Whilst those in the Yes camp are amply represented in the country's oligarch controlled media, the poll number are not restricted to just those who've weathered six years of austerity with their wealth intact. Pensioners fearful of their future, owners of businesses both large and small as well as those fearful of the consequences of a Grexit have swelled the Yes vote.

On the other hand the No vote included those with little to lose from maintaining the status quo, such as the unemployed and young voters who see that more of the same in a nation with record high unemployment is not an option. Also there are those who  are sick of Greece's continual humiliation at the hands of the EU, ECB and IMF and wish to show these institutions that enough is enough, no matter what the cost. The fact that political Ancien Regime, discredited by corruption and ineptitude has thrown its weight behind the Yes vote is just further proof that a No vote is justified.

What will happen on Sunday, I do not know. If you'd asked me a week ago I would have said that the Yes vote will win comfortably, but given the fact that EU leadership smugly seems to betting on this combined with a week long fear campaign on TV makes me think that perhaps that things will turn out differently. The same political forces that tried so hard to crush Syriza in the January elections are once again openly playing their hand, and there's a chance they'll fail now as they failed then.

Whilst people are angry they cannot take out money from their saving accounts and fearful for their future, there is a growing sense that they will not bow down and take anymore. Whether their vote is based on carefully calibrated deliberation or knee jerk nationalism, the result will be the same in the polling booths on Sunday.