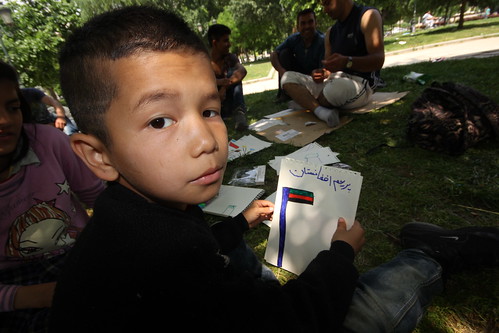 Today it was lentil and tomato soup, some bread and cheap chocolate croissants for the kids. As welcome as the home cooked food was, what most of the refugees that have chosen a park in the northern port city of Thessaloniki were interested in was Wi-Fi passwords and a place to charge their smart phones. We live in a schizophrenic age when people are forced to walk halfway across the European continent as if in a 1940's newsreel yet are guided by the latest Google apps and can tell family and friends back home that they are safe via Facebook and Viber.

At a time when flying from Greece to Berlin, Oslo or Rome can cost less than the price of mediocre restaurant meal the EU's draconian immigration regulations and the ever coarsening attitudes of northern European nations to refugees means that thousands are trekking across the Balkans, hiding in forests, sleeping rough in parks in the hope of escaping the wars Europe has been so eagerly fostering directly or indirectly in North Africa, the Middle East and Asia.

Along with groups of young men now the parks in the northern Greek port city of Thessaloniki,  and other cities across the Balkans are playing host to entire families, some with young kids also making the same arduous journey north. Hence the food my friend and I have been distributing, along with the advice on getting internet access. Not much compared with what they have face in the coming days and weeks but something, a remainder that Europe is not just home to frightened xenophobes, happy to forget their own horror stories of war and dislocation every time political carpet baggers and publicity hungry media bigots want to grab votes and headlines. 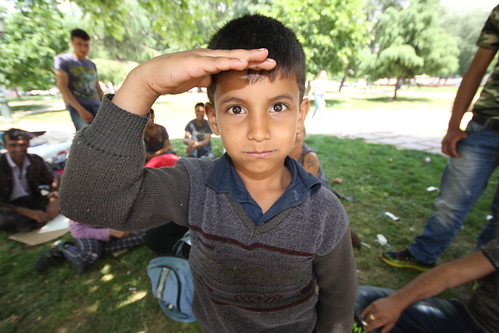