Passing through - memories from the Western Balkan Route 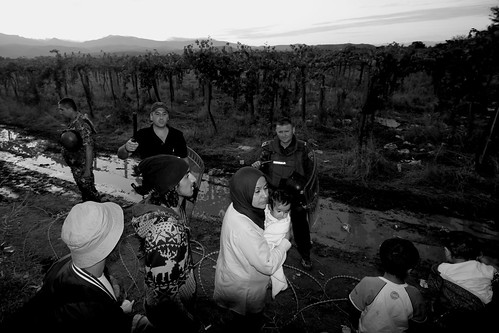 I took this photograph in August, 2015 in the neutral zone that separates Greece from it's northern neighbour, Macedonia. Then, the village of Idomeni was unknown, even to the vast majority of Greeks. A tiny railway crossing that for some reason was fast becoming the focal point for refugees taking the Western Balkan Route from  Turkey to the countries of northern Europe.

However, this day was different, instead of tens or hundreds making their surreptitiously across the border to catch the north bound train in the town of Gevgeliji, thousands had been left stranded by the decision by the Macedonian government to close down the unofficial crossing point and deploy both riot police and border troops to enforce this decision.

With summer temperatures reaching 35C+  these people were left to fend for themselves in the fields around the tiny railways station on the Greek side of the border, Drinking water was virtually non-existent and refugees were reduced to drinking water from the irrigation systems in nearby fields, and sanitary facilities were just a handful of portoloos that quickly became unusable due to the demands of so many people.

The fact that the border had been closed came as no surprise as this had been a fairly regular occurrence all through the summer of 2015 as EU and Balkan governments vacillated over what to do with the ever increasing number of refugees and migrants fleeing the fighting in Syria and Afghanistan and poverty in other regions of the world.

This confusion manifested itself as an endlessly changing policy on the part of the Greek authorities and in particular, the police who would turn a blind eye to refugees making their way from the Greek islands to Idomeni and then suddenly introduce bans of movement in the north. Not, that such moves made much of difference to the numbers of refugees moving north, if the trains were denied them, refugees took the local buses or taxis. In the worst cases when all other options were denied them , they simply walked, guided the 70 km from the nearest large city, Thessaloniki by Google maps.

However, not only the Greek authorities but also their Macedonia counterparts had started to clamp down on refugee movement and not only were the borders more tightly guarded, the train that connected Gevgeliji with Belgrade had been suspended, the daily service completely overwhelmed by the scale of the passenger flow.

Yet, the border was still relatively porous and the nothing to mark it out but a dusty series of paths and raggedy hedges that separated Macedonian and Greek fields. With nothing in the way of natural or man made barriers to deter them , many made the dash to the nearby town , chased down by Macedonia police or border units in the wheat fields.

On the other hand while this was an option for healthy young people with a sense of adventure, it was really possible for the bulk of refugees who were travelling in family groups, often with older relatives or young children, Instead, they sweltered in the summer heat, waiting for the travel rules to change once again as they has so many times before.

The local solidarity groups that had been helping those making the journey north since 2014 were overwhelmed by the sudden increase in the scale of the numbers of refugees suddenly amassed in Idomeni and so appeals groups across northern Greece to come and help out. I managed to wing a place on a convoy of cars and vans that had set out from Thessaloniki, carrying drinking water, cooked food, clothing and sanitary items. I had been doing this with my group since May and I thought my experience would help in this situation and in that I was completely and utterly wrong.

Not only was the scale of the crisis much greater than I had previously experienced, the state of those in need was far more precarious. Instead of providing food and clothing to those who were tired and weary from their journey from Athens to Thessaloniki, these people were in need of far more and as a result more desperate. It was a combination that required all those providing help and required a degree of discipline and organisation that we had till then not obtained.It quickly became clear that if we were not to create more problems then we were solving then we would have to up our game.

The experience and failures I witnessed that day would prove invaluable when our group started going up to Idomeni on a regular basis later on in September and till the route was finally shut down for good in March 2017.