The meeting that never was - Old media in terminal decline 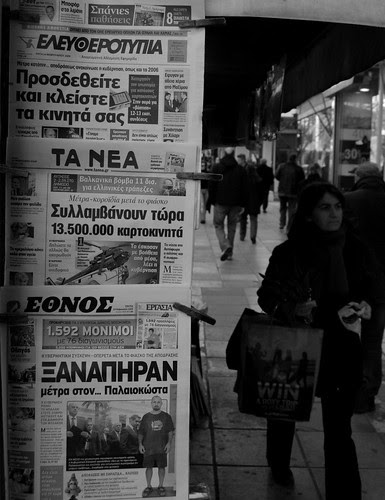 It's not been a good week for the mainstream media here in Greece. Today one of the country's leading dailies, Eleutheros Typos (Free Press) announced that it was closing down, blaming an unsustainable business model. Like newspapers in many parts of the world the combination of falling advertising revenue and the challenges of the internet has eaten into profits. On the other hand newspapers in Greece have long been facing a drop in readership which I think has nothing to do with either the current recession or free content on the web.

While access to the internet is growing it still lags behind the rest of Europe and so to blame it for the failure of newspapers here seems a mite premature. On the other hand the relatively low level of readership is, in part the result of a long term policy by local media corporations to cut costs at any cost. The result being a low quality product which is held in contempt by many; too much "copy and paste", too little quality content.


Greek newspapers and magazines are often little more than press releases, canned interviews and product placement, in fact anything that reduces reliance on trained professionals who might dare to ask for a decent wage. As a consequence the newspapers and magazine while looking as slick as their European counterparts are remarkably free of engaging content.

Another problem is reliability, at least as far as newspapers are concerned. Case in point being the recent gaffs by the three major newspapers who printed stories this week about the Turkish prime minister, Recep Tayyi Erdogan's visit to Athens. The Vima newspaper even went as far as to describe the "icy atmosphere" of the meeting with Greek prime minister, Kostas Karamanlis. The Ethnos newspaper was also there to provide us with a photograph of the Greek foreign minister, Dora Bakoyianni with her Turkish counterpart. The Eleutherotypia newspaper even put the story on their website proving that the adaptation of new technologies can be used to reproduce bad habits.

Just one small snag. None of this ever happened. Erdogan decided to postpone his meeting over the weekend so he never arrived in Athens. Imagine the Times, the Guardian and the Daily Mail all writing about the tense meeting that Gordon Brown had with Nicolas Sarkozi in London yesterday, only to find out Sarkozi had not even left France. It's hard to imagine a mistake of that magnitude being permitted in not just one but three national newspapers in any place that took journalism seriously. 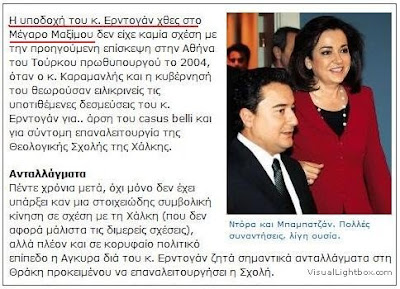 So all the pages of reporting and analysis printed last weekend were simply the figments of a journalist's/editor's imagination. Nearer the truth is the fact that nobody even bothered to check what happened and just rehashed an old story. Sad but its is this kind of sloppy, "grab something from the freezer" reporting which is killing newspapers. Why would anyone pay three euros for this kind of low grade landfill?

I stopped reading Greek newspapers on Sunday years ago when it became perfectly apparent that once you took away all the ads and bumpf there was very little to actually read and that most of that was stale as week old bread. The old media is indeed starting to show its age.
Posted by teacher dude at 1:40 pm