Here are two news stories I noticed which didn't get widely reported outside Greece. I wrote about them for Now Public but not many other English language news sources picked up on them.

Nine subway carriages worth 13.5 million euros went up in flames during the early hours of Tuesday morning following an arson attack on the Athens - Piraeus Electric Railways (ISAP). A group of approximately 15 - 20 people wearing party masks boarded the last train at 1 am and when it reached the final stop in the Athens suburb of Kifissias set fire carriages (click here to see video from Mega Channel).
According to unconfirmed police reports as soon as the train reached Kifissias, its last stop the attackers forced passengers to disembark and then doused the carriages with inflammable material and set fire to it. Afterwards molotov cocktails were thrown at other parked carriages nearby.
Although no group has claimed responsibility there is strong possibility that the incident is connected with the recent attack on a labour activist who was worked as a cleaner for ISAP. In December Konstandina Kouneva who was secretary for the All - Athens Union of Cleaners and Domestics Cleaning Employees was abducted and forced to drink acid resulting in massive internal injuries and the loss of one eye.

According to Kouneva the assault followed a series of telephone threats prompted by attempts by the union to expose alleged labour rights abuses by the OIKOMET employment agency.
The incident prompted several protest marches and attacks on targets connected with the OIKOMET, which employed Kouneva and has a contract with ISAP.

Two previously unknown groups calling themselves The Gangs of Conscience and Perama Extremists claimed responsibility saying, it was, in part, a protest against what happened to Konstandina Kouneva. In addition it also said that it intended futher attacks on the public transport system in its proclamation.


The second story is from the Greek port of Patra. 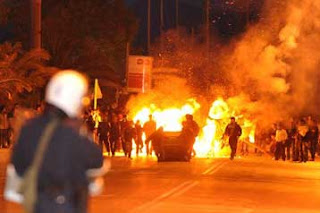 Hundreds of refugees from Afghanistan clashed with riot police for hours yesterday evening in the western Greek city of Patra. The disturbances were sparked off when an Afghan man was seriously injured while trying to board a truck entering the city's port. After the accident tens of fellow refugees attacked the vehicle throwing rocks and other objects.

Later the tensions escalated leading to protesters setting up barricades and closing streets near the port. In reply the police deployed riot units and used tear gas in an effort to disperse them.Running battles lasted into the early hours of Tuesday morning as police attempted to confine the protesters to a shanty town that serves as a home for over a 1000 refugees in the city.
Unconfirmed eyewitness accounts reported on Greek blogs and Indymedia Patra speak of the involvement of residents including members of far right groups in efforts to put down the demonstration. Eventually the police were able to push back the refugees to their encampment and disperse far right groups.

Patra, which is Greece's gateway to Italy has become a way station for immigrants seeking to reach the rest of Europe. However, the Greek state has been reluctant to give official asylum status to all but a handful of immigrants entering the country without proper documentation. Greece's daily newspaper Kathimerini has reported that out of 20,692 asylum applications submitted in 2007, Greek authorities approved eight.

As a result refugees are forced to attempt the crossing to Italy illegally, often in the backs of trucks bound for the Italian ports of Brindisi and Ancona.

The riots are the latest in a series of clashes between refugees and the authorities in Patra, including a series of accusations of police abuse of Afghan refugees. In September 2008 there were also riots as refugees clashed with police and Customs officers inside the port following the beating of three immigrants.
Posted by teacher dude at 3:14 pm