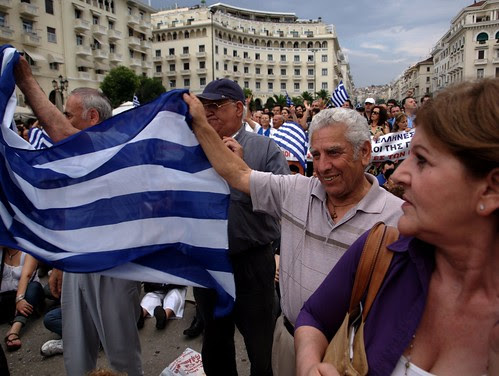 Judging by the reports circulating in both the Greek and foreign media The End of Days is indeed almost upon us if Athens cannot form a government within the next 24 hours. You would think that such an awful prospect would focus minds of those in power and yet it is just business as usual for Greece's political elite who, even now are more interested in playing political musical chairs than in dealing with deep rooted problems.


According to much of the local media Greece is facing catastrophe as the Radical Left Coalition party (SYRIZA) is refusing to take part in a government of national salvation along with PASOK, New Democracy and the Democratic Left. As a result journalists and senior officials say that new elections will have to be held which could irreparably damage the country and lead to Athens exit for the Eurozone and possibly EU.

However, the maths do not add up. PASOK, New Democracy and Democratic Left have between them 168 seats in the country's 300 seat parliament, more than enough to form a majority government. Indeed, if the Independent Greek party could be persuaded to come on board then the coalition would boast an impressive 201 majority. However the fly in the ointment is the Democratic Left's insistence that they will only help form a government if SYRIZA is also part of it. On the right Panos Kammenos's conservative Independent Greeks have repeatedly refused to co-operate with New Democracy. 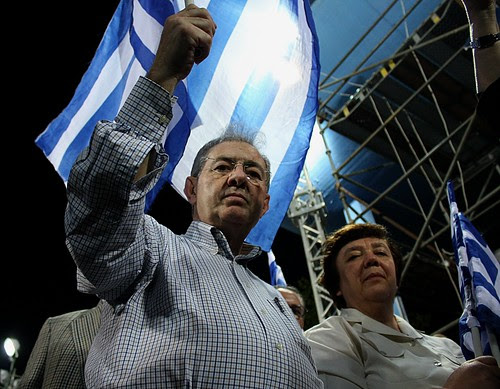 However, that is not the media narrative being promoted. Instead Antonis Samaras, leader of New Democracy, Evangelos Venizelos, leader of PASOK and Fotis Kouvellis, leader of Democratic Left have all put the blame firmly on SYRIZA's Alexis Tsipras. But if the situation is so dire then some kind of compromise can be reached, surely?


And the answer is no as this is all part of the tawdry political game that has been played since Greece sought  help with its debts in 2009. Once again the heads of the two major parties are hoping to shore up their dwindling electoral base by scaring the living daylights out of voters with talk of unpaid pensions and imminent economic collapse. PASOK, led first by Giorgos Papandreou and then by Venizelos used the same language to push through austerity legislation despite the presence of hundreds of thousands of disgruntled Greeks protesters outside parliament.


Instead of cobbling together a government both Samaras and Venizelos are already campaigning for the next round of elections, most probably set for 17th June by attacking SYRIZA who are according to latest polls on track to be the largest party. The message is clear, if you vote SYRIZA Greece will go bankrupt, be kicked out of the Eurozone and all your savings will be lost. The EU has helpfully made such scenarios more realistic by refusing to release money promised for the payment of Greece's day to day running costs (money destined for debt repayments was paid on time).


It is a message that is likely to weigh on people's minds as they vote and may be enough to put off those considering voting left. On the other hand, unemployment, especially among the young is climbing rapidly, prices of basic goods are spiralling upwards and many have lost any hope of a decent future. Will they be swayed by talk of the End of Days? For them they are already here. Will talk of lost savings affect those under 30 who have none to speak of?


There are two contradictory forces at work as far as the next elections are concerned. On the one hand the fear of possible national bankruptcy may well drive those who still have something to lose back into the arms of New Democracy and PASOK and so give them a boost, perhaps enough to form a government of their own.

On the other hand disgust with the ineptitude and corruption of the current political set up has not disappeared and the inability of the main leaders to recognise that is costing them dearly. People know full well, that despite promises to renegotiate terms of the bailout agreement if Germany refuses (and there seems every indication that they will) then Greek politicians will have little choice but to accept the decision. Another round of public spending cuts and tax hikes would follow just adding to the economic woes that Greece has been facing for the last five years. 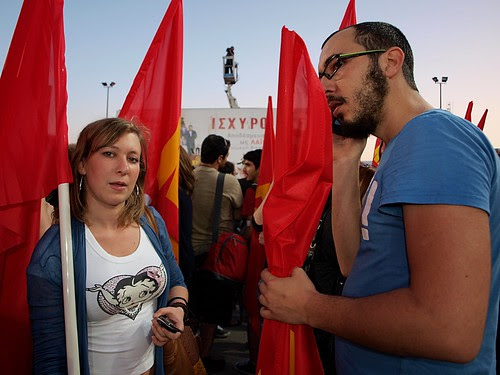 SYRIZA benefited from the disgust that ordinary Greeks feel about their government in May and that is likely to be repeated in June. However, there are several factors that may up their share of the vote still further. Both PASOK and New Democracy have shown that even after the drubbing they received they have not changed attitudes in the slightest and still continue to act as if the elections never happened. This will provide SYRIZA with extra votes, especially from younger voters who are not benefiting from the status quo.


Also the endless back room political games played by newly formed Democratic Left in the last few weeks have alienated even its own MPs and will cost them in June, the most likely recipient of their votes will be SYRIZA. The fact that the Greek Communist party has decided not to work with any other left parties has irked many of its electoral base, especially the young who do not want to sit of the political sidelines. Though the number of voters will be quite small as the party's supporters are among the most loyal in Greek politics


Lastly, as SYRIZA has emerged as a viable political force more and more voters will no longer see a vote cast for them as wasted, so attracting people who see them as something more than a party of protest. Voters, like everyone else love winners.
Posted by teacher dude at 1:42 pm

Great stuff on the Debt Crisis, i have to say i am struggling to understand the leaving the euro position, seems like it wont make anything better.