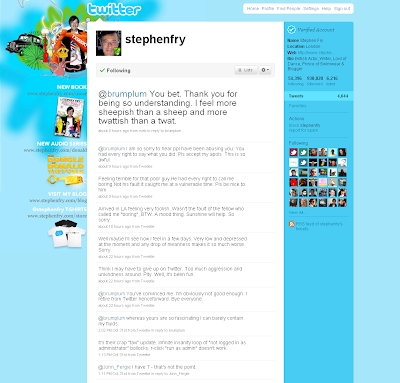 It seems that even in the 21st century we still need a vat of boiling tar and a sack of feathers on hand to punish those considered to have violated the rules of their community. In times gone by the hapless transgressor would have been covered in the black stuff and then rolled in down, a lesson to others that the upstanding folk of this burg would not put up with their shenanigans any longer.

In an electronic twist on this fine tradition we now have Twitter, on which tweets, retweets and hash tags achieve much the same results but with less mess (besides, trying to pluck a frozen chicken is a thankless task).

"Nothing is more unpredictable than the mob, nothing more obscure than public opinion."

A mild comment by Brumplum that he found Fry's Twitter output boring followed by the surprise announcement by Fry himself that he was considering quitting Twitter as there was "Too much aggression and unkindness" sparked off an instant reaction and people quickly reached for their electronic pitchforks and went a - hunting for the culprit. Here is a taste of some of the Twitter responses;
abacab1973 @brumplum wanker. hope you enjoy the whirlwind of shit that you've invited.
musicknurd721 This person @brumplum is be the mosthated individual in the world..Finally found someone that wins douche of the year instead of Kanye
iamJaymes This asshole (@brumplum) may have caused@stephenfry to quit twitter, I don't know about you but I want torches and pitchforks at the ready!

Brumplum, or Richard as he known to the non - Twittering world is not the first to feel the wrath of keyboard avengers. In the last couple of weeks oil trading firm, Trafigura, Home Office minister, Alan Johnson and newspaper columnists Jan Moir and A.A. Gill have all attracted the collective ire of Twitter users. Thousands upon thousands of words have been sent out into the ether condemning them for their sins, both real and imagined.

Richard's case, however, is different as he is not a scum bag corporation guilty of untold human misery, a hate mongering hack looking to raise sales figures nor a rifle carrying moron with taste for blood.No, he was an ordinary guy who happened to politely express his opinion about a public figure and as a result was hounded for it by thousands online.

This whole affair has the whiff of the lynch mob about it, a reminder that even "nice people" can behave badly and that online beastliness is not the sole preserve of far right conspiracy theorists and religious wingnuts.

Thankfully, this story has a reasonably happy ending with profuse apologies being offered and accepted on both sides and appeals by Fry to put all this behind us. Yet this incident does raise some worrying questions about the nature of sites such as Twitter and the internet in general. As people, organisations and government become more adept at using this new technology they will realise that the mob still has its uses for dealing with those who disagree with their views and I predict that future Brumgate incidents will not have such a benign conclusion.
Posted by teacher dude at 10:56 am

Unfortunately this, and other instances on twitter, show just how stupid and reactionary far too many people are. They don't wait for facts, they just want blood. And it's over something inane. We all survived just dandy before Twitter, and we'll survive when it's replaced by another newer cooler social networking site.

Geez, what are people going to do when the power goes out??