My friend is dead 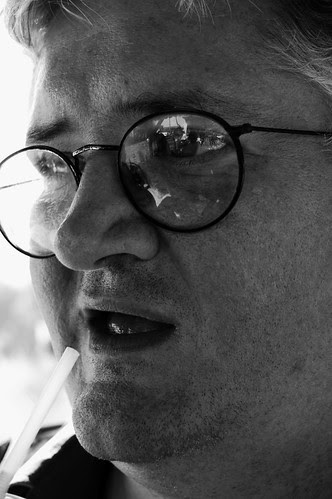 Just after midnight on Sunday my friend, Chris finally succumb to the effects of a failing liver. After slipping into a coma last week he died without gaining consciousness while in hospital in London. I know this because I heard the words from a friend on the phone, saw the SMS he'd been sent and read the messages on Facebook.

Of course, none of this is true, it can't be true. I spent most of yesterday deciding that all this was just an electronic illusion, a meta - data mix up. I was sure that he was not in a coma but rather had his nose in a Penguin classic, preferably something from one of the classical ancient Roman writers, or perhaps he had decided to wade through the third volume of Gibbon's Decline and Fall of the Roman Empire. He can't be dead, he's no older than me. It's just a mix up, somebody's idea of a prank.

Denial has its charms, it allows you to operate even in the face of the most terrible of news, to function even when your heart wants to break. So my friend isn't entombed in frozen vault in an antiseptic, lifeless room, he's flirting with some nurse, chatting away to her in that easy, charming way that women found so endearing, which I so envied him for.

While I am angry that such a rich life has been cut short I am trying to give meaning to what has happened and remember the person I was proud to call a friend for almost two decades, who packed more into his time on the planet than a dozen men who measure their lives in coffee spoons. I am sure he'd recognise the literary reference, just as I''m sure he'd find some witty way to dismiss its source.
Posted by teacher dude at 5:12 pm

I am so sorry to hear Craig...

My condolences. I'm sorry for your loss.

Very sorry for the loss...

My condolences to you and the family of your friend-even though we are literally worlds apart-death is the enemy of every living thing on this earth.

This is an individual that you've known for many years who was very resourceful and knowledgeable. And it's always the ones of that sort that when they fall asleep in death, it hurts us the most because of the closeness that we felt with that individual.

One day, according to Biblical prophecy, we will see our deceased loved ones again-friends and relatives-on a paradise earth.

I hope this has been of some encouragement to you, sir.