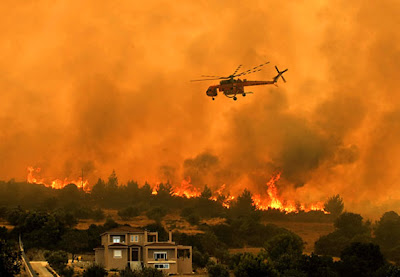 Forest fires are continuing to rage out of control in the Attica region of southern Greece, threatening towns and villages in the area. Agios Stephanos, Dionysios and Palia Pendeli have all reported that the fire has reached the outer suburbs and authorities are asking inhabitants to evacuate the area.

The wildfires which started on Friday evening have now spread with a front covering 42km with smoke and ash reaching as far as the capital, Athens. As a result hospitals, old people’s homes and army bases have all been evacuated.

With the fires covering such a wide area local fire fighting forces are unable to deal with the scale of the event. Italy and France has already sent specially equipped aircraft to help in the fire fighting effort. Ground based efforts have been hampered by the difficult terrain leaving the only effective alternative airborne fire fighting helicopters and planes.

Greek TV channels have been filled with pictures of homes and farms being devoured by flames bringing back memories of the 2007 fires which claimed 84 victims in the Peloponnese region.

The authorities have not announced whether there have been any casualties so far, however, the news services have reported that many local inhabitants have refused to leave their properties, despite repeated calls by the police.

Although Greece regularly has wildfires a study carried out by the Athens University of Economics suggested that there was a direct link between their destructiveness and national elections. According to Spyros Skouras and Nikos Christodoulakis half of the forest lost through fires in the last 54 years took place in the 16 years in which elections were held.

The last serious fires to hit the country in 2007 took place just weeks before parliamentary elections and most political analysts consider the announcement of new elections within the next few months a certainty.
Posted by teacher dude at 2:29 pm

looking at the TV news, the fire spread out very far. it is so horrible.