I love the smell of tear gas in the morning 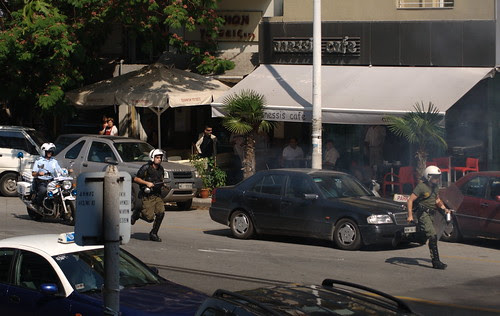 It's only 11am and already I've been tear gassed and broke my personal best in the 200m sprint thanks to the MAT (Greek riot police). What a way to start your day. I haven't even had chance to get a coffee and already the forces of law and order are chasing me down the city's main streets.It's 35C and and I'm desperately trying to make sure I'm not the at the back of the bunch of protesters running away from the flash grenades and clouds of tear gas wafting down the road outside Thessaloniki's central courts. Not helping matters are the newly formed Delta motorcycle cops who have taken a leaf out of the Iranian police public order manual and are chasing down demonstrators with their bikes.

But I have gotten ahead of myself, it seems. This morning I decided that I would cover the case of Ilias Nikolaos who was applying for bail after being arrested and charged with arson in January. I thought I might be able to take some photos and write something for the blog or perhaps one of the other sites I contribute to. When I got to the court rooms the riot police were in position around the building so I guessed that I had chosen the right venue, however, I couldn't see any protesters outside. Wandering in everything seemed quiet so I guessed that I'd probably missed whatever had happened. I was just about to leave when I suddenly heard people chanting slogans and almost immediately afterwards a stream of young people descended the central staircases, heading for the front doors.

Next thing I knew the riot police stationed at the rear were donning helmets and getting ready to invade the court building from the other side. With my long hair and black t-shirt I figured there was little chance I'd be mistaken for a lawyer or court employee so I legged it out the front door with everyone else, grabbing my camera out of my bag on the way.

As the demonstrators, mostly anarchists from the city's many communes, gathered outside the riot police decided to go into action and started throwing flash grenades and lobbing tear gas cannisters at anyone in the vacinity and so pausing briefly to take pictures I followed the crowds knowing full well that anyone found on their own is a target for the local goon squad who hit first and don't bother with questions afterwards.

Afterwards it was off for coffee with friends in order to get a caffeine hit to go with my adrenaline rush.

that's why i am so glad to live in athens, as it's much more peaceful ;) ...na, not really, coming from a small village with many trees and cows would await autumn and its smell...
stay safe.

Oh man...
just another day in the city.
Glad you're safe!!

Oh, it's not so bad. Just think of it as Disneyworld with an edge.