Ian Tomlinson - There are lies, damned lies and official accounts 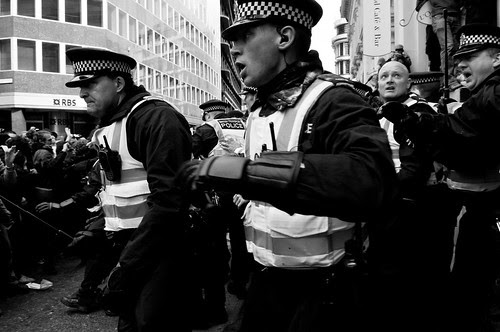 Thankfully we live in a world were not just the authorities but also you and I can record what goes on around us. I think that the London Metropolitan Police have yet to grasp that our love of high tech Orwellian style surveillance equipment cuts both ways and they too are constantly in the eye of a media storm.

Of course, I was sure that the death of Ian Tomlinson who died minutes after an unprovoked attack by officers during the G20 summit demonstrations had also been recorded on one of the innumerable cameras that cover central London but now it turns out that a number of participants in the protests also recorded the attack and were able to get the message out unfiltered. Today's Guardian has footage taken of riot police hitting Tomlinson as he was quietly walking away from them, his hands in his pockets. Just minutes later he was dead, the victim of a heart attack according to official version of events.

The police announcement released soon after his death mentioned nothing of the attack and and indeed sought to blame protesters for supposedly impeding attempts by ambulance crews and officers to provide first aid. It seems there are lies, damned lies and official accounts.

It is interesting to note just how similar was the official reaction to Tomlinson's death to that of 15 year old Alexis Grigoropoulos, shot by police in Athens last December. In both cases the police gave out reports that was almost entirely at odds with eye witness accounts and later evidence. Yet much of the mainstream media choose to accept the official interpretation at face value even though those present told a different story. Also in both cases video footage came out that quickly disproved the version given by officers involved. 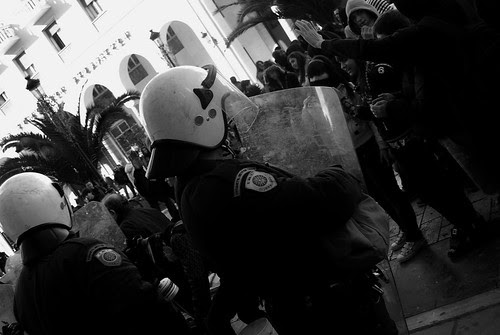 Unfortunately, I believe that we are likely to see a similar outcome in both cases and those responsible for both deaths are unlikely to get the punishment they so richly deserve. They'll find ways to worm their way of the fact that they are reason two people died without cause.

We will hear the same tired cliches such as "exemplary police behaviour", "professionalism" and that "they did an excellent job under very trying conditions". Words like "restraint" and "regrettable mistake" will be thrown around all the while the real villians of the piece will quietly merge into the background.

Just remember that your mobile/cell phone with its ability to take photos and video just may be your best weapon when the authorities next try to cover up incidences of their bad behaviour. It might not help in court but it will where it matters in people's hearts and minds.

Well, I wasn't there to see the incident but the police were very intimidating! They wouldn't let anyone stand anywhere for longer than 10 minutes; they would give no reason why they wanted us to move to a different location; they kept a lot of people imprisoned for hours in front of the Bank of England; they would reply in a very arrogant matter to any question the protesters asked; and yes, they would charge at any moment they felt "threatened"! Now, how threatened can someone feel when covered in so much gear and assault equipment, it's incomprehensible.

Since the G20 meeting, the streets of London are literally filled with police, in any form; riot police, secret police, normal police, community police, you name it; it's getting tiring!

A thug is still a thug no matter what badge he carries.

The video says it all.
What goes around...