The Ian Tomlinson case - A wake up call for traditional media 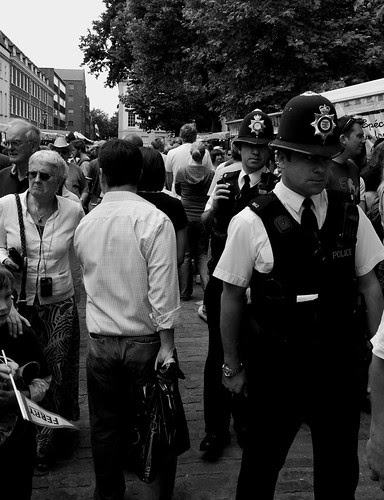 Photograph by Teacher Dude
After an embarrassingly long gap the mainstream media in Britain has finally woken up to the fact that there was something amiss about the death of Ian Tomlinson during last week's G20 summit protests. Initially, newspapers on the right of the UK political spectrum gleefully lapped up police accounts of beserker anarchists pelting officers and first aiders attempting to help Tomlinson, 47 who had apparently collapsed due to a heart attack whilst walking home from work through the protests in central London.

However, almost immediately images and accounts from people present started to circulate on the internet which contradicted the official account of what supposedly happened to Ian. Eyewitnesses spoke of efforts by demonstrators to help despite harassment and threats by the riot squad units in the vacinity. Thankfully, The Observer ran a story exposing the inconsistencies in the official version and video has been posted by The Guardian which shows a clearer idea of what really happened. That Ian had been the victim of an unprovoked attacked by a balaclava wearing officer who struck him from behind and shoved him to the floor just minutes before he died.

Still, questions still remain about what happened next. In the video Tomlinson seems to be shocked though basically unharmed, yet according to extra footage shown by the BBC the next thing we see is him surrounded by officers supposedly there to protect him whilst first aid was administered.

With so many video cameras around do the police really think that they will be able to cover this up the same way they did with Jean Charles de Menezes. One thing is certain though, they will try their best to make sure that the truth doesn't come out. Nor will they deal with the problem of heightened levels of police intimidation and violence that seem to accompany any large scale protest in the UK nowadays. If the Chinese, North Korean or Iranian authorities used these tactics the press would be screaming about suppression of civil liberties, yet when practiced by "good, old English bobbies" they are considered perfectly acceptable by much of the British press.

Time and time again I have heard members of the traditional media cry that bloggers and others who get their news out via the internet do not check their facts, are unreliable and prone to simply write whatever they like irrespective of what the truth of the matter is. And yet these same media professionals are just as likely to let stories like the Tomlinson case ride rather than do their job. They'd much rather simply copy and paste the official line and settle for a quite life than ask awkward questions that might get them in trouble with the editor/owner.

In such a situation what exactly is the advantage of their much vaunted professionalism and supposedly superior insight in the world of news gathering? Thankfully, there now exist a parallel system of reporting which can act as the mainstream media's conscience, should they care to listen.
Posted by teacher dude at 1:13 pm