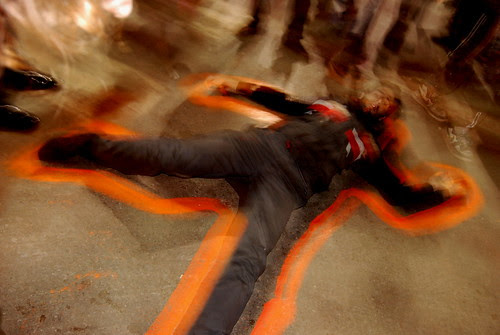 The similarities between the death of Ian Tomlinson who died during the G20 summit protests and Alexis Grigoropoulos, whose shooting last December in Athens sparked off weeks of rioting across Greece seem to be growing ever stronger. In both cases the unlawful death at the hands of the police was initially met with silence and/or lies.

In the case of Alexis the original official account said that the 15 year old had been part of a group of anarchist who had attacked a patrol car with stones, bottles and Molotov cocktails. The officers involved had, according to the police been forced to fire into the air and that one such shot had accidentally killed the teenager. In the case of Tomlinson, the London Metropolitan police said that he had been walking home when he had suffered a heart attack and that attempts to aid him had been met by a barrage of bricks and bottles.

As we know now both accounts turned out to have only the slightest connection with what really happened. In the case of Alexis eye witnesses and later video evidence quickly came out that showed that he had died after having an argument with a policeman who aimed and fired his weapon at him. Likewise in the Tomlinson case eyewitness accounts told of an unprovoked police attack backed up by video footage.

In both Athens and London the vast majority of the mainstream media were quite happy, at first to accept the authorities version of what happened and even embellish their accounts with, as it turned out, literary flourishes that undermined their credibility. Luckily, The Observer and the Guardian kept on hammering away at the story despite official harassment from the IPCC.

Now it seems that both cases are continuing to follow the same pattern of developments. Once the authorities in Athens realised that their original cover story had been blown they decided on another approach in the media battle for the hearts and minds of Joe Public; namely, they thought that they could save the day by mounting a campaign of smear and innuendo that would tar the reputation of the victim and so justify the actions of the officers involved.

Within days much of the Greek press corp published stories from police sources that painted Alexis as a delinquent malcontent who loved nothing more than make trouble in the Exarchia neighbourhood where he died. Indeed the newspapers even went as far as to publish a report by the police officer's lawyer that highlighted his allegedly chequered school record and grades as supposed evidence of the teen's delinquency and so "guilt".

Now we see the same thing with Ian Tomlinson. The police have seen their attempt at a cover up blown so wide that even their supporters in the media cannot help anymore. Faced with media scrutiny of their actions stories are now appearing in the right wing press that have tried to smear Tomlinson, attack his character and so justify the officer who killed him.

It is claimed that he had been drinking heavily and had gone out of his way to provoke officers who were operating under very difficult circumstances. What such reports fail to mention was the widespread use of indiscriminate violence (including attacks on a Channel 4 camera crew) by the police to control the situation and the use of "kettling" which allowed tensions to rise that would have been dissipated had protesters been allowed to leave.

Again the hope is that such accusations will make us forget the video footage which showed Tomlinson attacked as he was walking away from the police. Even if what the newspapers say is true then do the police have the right to treat people with such contempt during what had been , despite intense provocation, a mainly peaceful demo?


My only hope is that the tactic backfires as badly in London as it did in Athens. Then the claims by the police not only managed to add to the feeling of anger felt by many taking part in the protests but also disgusted many who had up to that time remained undecided as to whether the police had done something wrong.