After this is all over, there needs to be some kind of reckoning to ensure those who lead us like lambs to the slaughter during the #COVID19 outbreak are called upon to account for their failures. Otherwise this whole debacle will be repeated.

The virus is an act of nature, the official response is not. 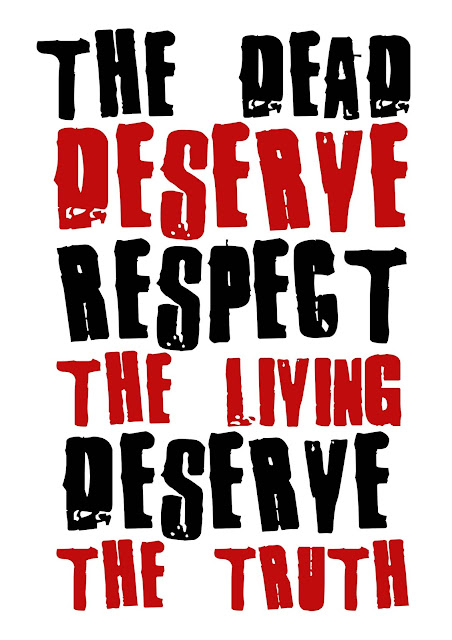 Are you staying home? 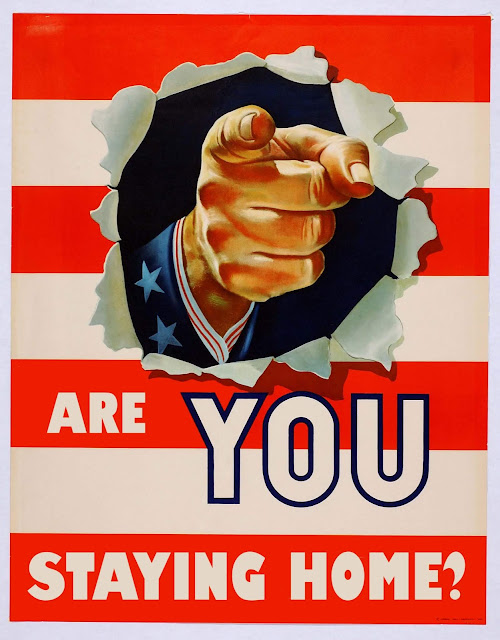 Manolis Glezos, the legenadary anti-fascist resistance fighter who fought all his life against oppression all his life passed away yesterday. Here is a potrait I took of him in 2009. 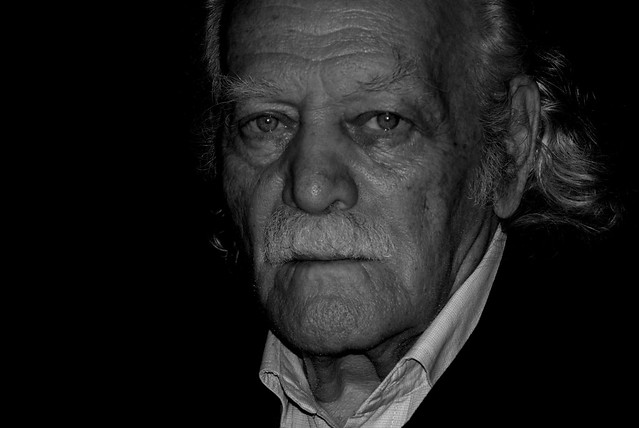 Cooking for the end of the world - Season one episode one

Last night I had the choice of either watching Contagion (2011) and never sleeping again or cooking something from scratch. Luckily, I enjoy cooking and I find it helps calm me in stressful times. The problem is the output is outpacing my ability to consume it and storage space in my small refrigerator. However, here is a recipe which is a good way to use up stuff from your cupboards or fridge which might go to waste otherwise. 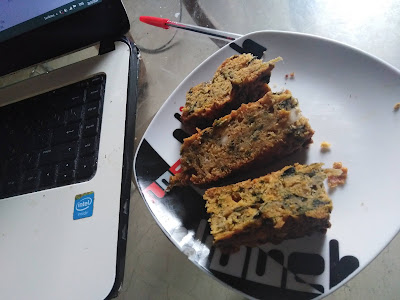 1 - Gently cook the sliced onions till soft, then add the chopped garlic for a minute 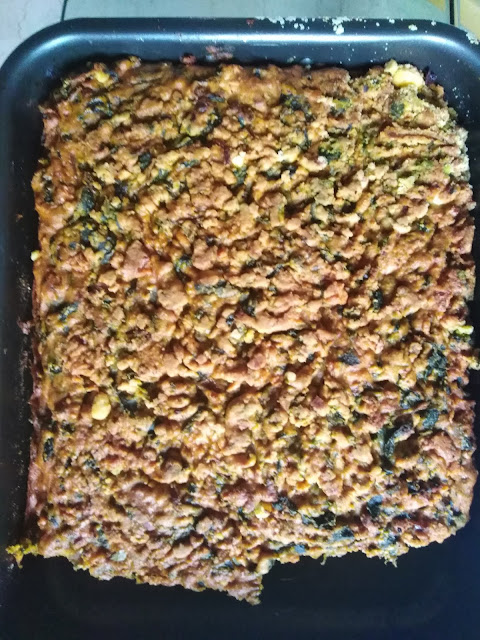 The dangerous role of machismo in COVID19 politics

On of the things the COVID19 crisis has exposed is the kind of macho, bullish politics practiced by many on the Right. We've all seen leaders such as US president, Donald Trump and  UK prime minister, Boris Johnson play down the pandemic, dismiss experts' fears as overblown and even continue to deliberately flaunt advice on social distancing. during public appearances.

In addition we've seen  how private health provision, which has been flaunted by economic conservatives, as a universal panacea for public health woes is in no better position to deal with these kind of mass public health issues. Indeed many of the base elements on which modern Conservative dogma is based; supremacy of the private sector, the advantages of a  smaller state and the primacy of individual freedom over all other considerations, have proven to be catastrophic in dealing with a pandemic. Left unchecked  the ideas of the free market ultras will literally end up wrecking the  global economy and along with it, millions of people's lives. 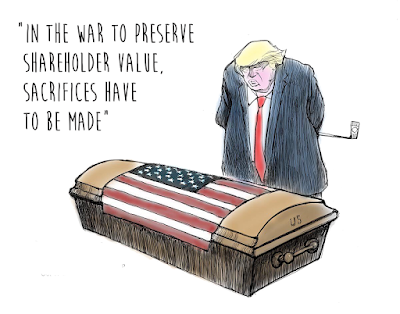 In its most insidious form, this new political and ideological machismo is being expressed in the form of a return of the idea of Eugenics and the belief that the older and more vulnerable must be sacrificed in order for the global economy to survive. This is being expressed more bluntly in US conservative circles but there is a British version ,which although framed more delicately, is just as dangerous, We can see in the idea of 'herd immunity' which the  ruling British Conservative Party was so happy to promote until they realised that it would end up crushing the nation's public health system
Posted by teacher dude at 1:21 pm 17 comments: 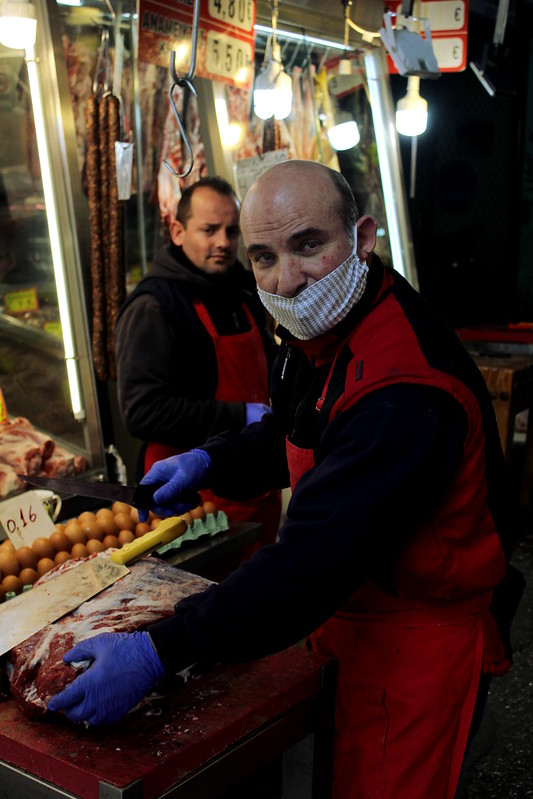 Greece has imposed a form of curfew in order to curb the spread of  Covid19. From yesterday those outdoors need to have some reason for travelling and some form ID (passport/police ID etc). Those who are travelling to or from work need to fill in a Type A form from the Greek government site which they have to fill in. That form has to signed and their employer needs to stamp the paper There is a fine of 150 euros for those not heeding the news rules.

Type A form can be downloaded in English  here.

For reasons other than work, people need a Type B form which can be downloaded in English here.

Finally, you can write out a handwritten version of this ahead of your journey. This must contain the following information:

NOTE: Greek banks are no longer accepting payments in cash in branches and putting limits of the amount of money that can be withdrawn per day.via ATMs.

For more info and latest development check out the Keep Talking Greece blog. 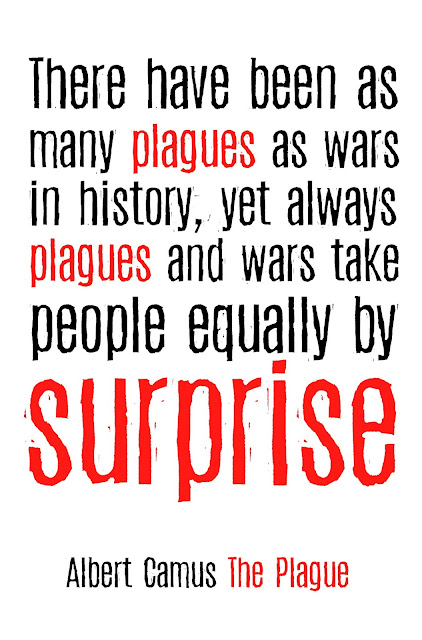 "There have been as many plagues as wars in history, yet always
plagues and wars take people equally by surprise."

You can hear the audio book here
Posted by teacher dude at 9:57 pm 12 comments:

Yesterday the Greek government tightened up its rules concerning travel and movement. For now on people have to justify why they have left their home via some kind of official statement and carry with them either their passport or police ID.  Otherwise there is a 150 euro fine.

There are three ways to declare reason for travelling;

1 Send a free text message to 13033 along with name, address and reason for travel (see below for details).

2 Download, print out  and fill in a form from this Greek government site.

3 Write by hand the same information - For people who are travellling to work this includes, name, home address, employer, times of travel. Full details (but only in Greek) are here

Here are details for the SMS/text message option in Greek English and Arabic. 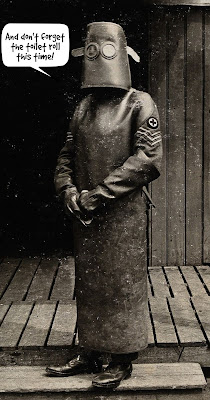 I'm not sleeping. Or rather I'm not sleeping enough. Every night this week I've woken up around 4 or 5 o'clock and been unable to get back to sleep. However, unlike this is no '4 AM of the soul' kind of insomnia, driven by existential questions about what will happen to me in the future. No, this is far more concrete and far scarier. The Corona virus outbreak has been in Greece for weeks now and the news just keeps on getting grimmer and grimmer with restrictions on movement becoming ever tighter. There's even talk of a possible curfew over the weekend, though what this depends on seems unclear.

Officially the number of COVID-19 cases in Greece seems to be rising slowly, with just 30 or 40 new ones per day. The number of deaths is currently six, in both cases the figures are far lower than in many other places, yet it is very hard to get accurate, independent information. The current Greek government, like so many before it, always attempts to bury or ignore bad news. The fact that so much of the local mainstream media is willing to support the ruling conservatives New Democracy party, just adds to their ability to present whatever message they see fit.

During the recent tensions on the Greek-Turkish border, example of extreme abuse of migrants and refugees by Greek security forces only came to light due to the work of foreign news crews. Even then, the government and their many supporters in domestic media were happy to decry all such incidents as 'fake news' without feeling the need to provide any kind of evidence to support their claims. I'm worried that  this same pattern will be repeated, either in the name of national security or for less honourable reasons of party self-interest.

Whatever the true picture is, the good news is that ordinary Greeks are taking the official instructions about self-isolation, social distancing and other preventive measures in deadly earnest. The streets are not empty yet, but the number of those out and about is far, far lower than before. The thing is we are having a gloriously mild spring and the weather seems perfect for going out and relaxing at a cafe or in park. Not that this is possible as all the cafes, bars, restaurants have been closed down for anything other than take away. 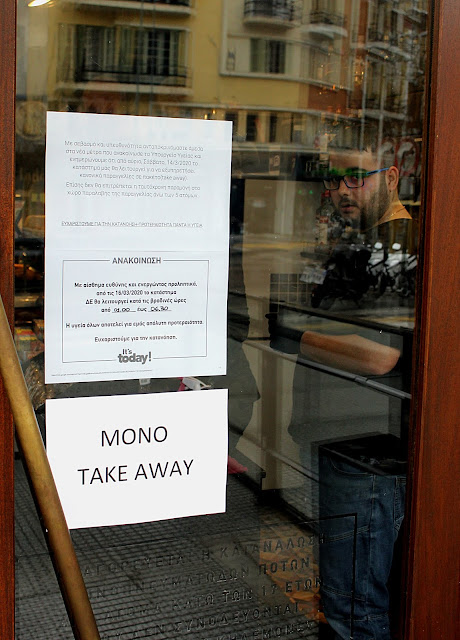 This morning, once again unable to sleep beyond 5 AM, I decided to stock up once again just in case the talks of a weekend curfew proves to true. The local supermarket security guard was carefully controlling the flow of people entering and there were gloves for customers who wanted them. The shelves are still full and there are few shortages, with the one exception of yeast. It turns out Greece is once again turning into a nation of home bakers, a folk reaction, perhaps, to previous crises and disaster the nation has been through in living memory. 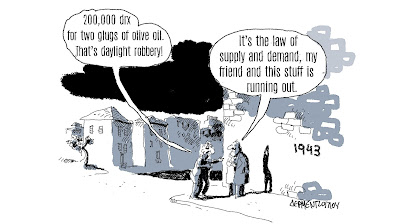 I remember when I first came to Greece, my then girlfriend, Athena had invited me to her place and I still remember vividly standing in her kitchen as she explained in an somewhat embarrassed way why all the cupboard space was full of bags of sugar, sacks of flour and large 5 litre metal containers with olive oil called 'teneke'. This was something her mother always insisted on having in the home, a relic of the difficult times she had lived as a young child during the German occupation of Greece in WWII. Then, a collapse in food production and distribution to the cities caused widespread famine which killed tens of thousands. Even so many years later, after most Greeks had achieved the kind of material comfort and prosperity undreamt  of by previous generations, the memories of those difficult times still haunted Athena's mother and many other members of her generation.

And not just her. The sudden spike in prices for things like surgical masks and hand gel was termed 'black marketing' by many and the urge by some, especially those who have the wealth and power to exploit a crisis reappeared. TV stations, owned by some of the richest
men in Greece were full of their own ads for 25 euro packs of masks. A week ago those same six masks would have cost just a few euros from any pharmacy. The fact that these very same TV stations are the ones who are so happy to support the government and act as PR agents just add to my anxiety.

The funny thing is that I stopped blogging regularly here just as another crisis was starting in 2015. Then I ended up heading a refugee solidarity group that worked in the camps on Greece's northern border for six months and I saw just how bad things can get when things fall apart.
Posted by teacher dude at 9:59 am 13 comments: 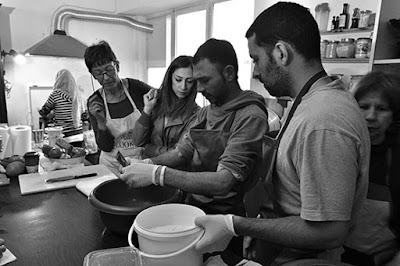 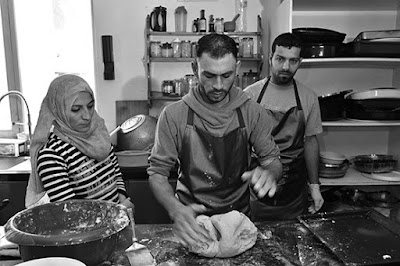